History of the Native American Flute 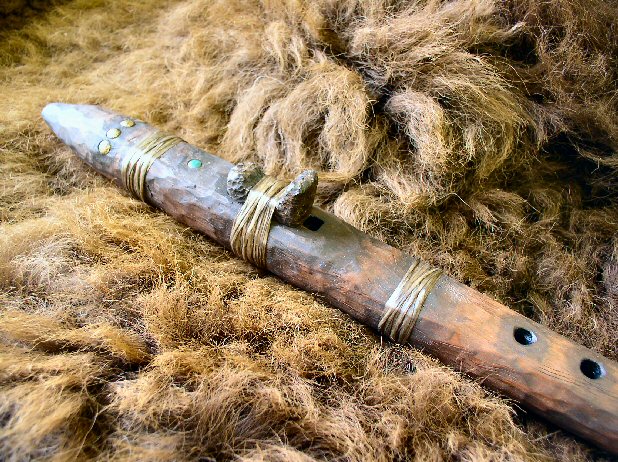 The Native American flute has been reported to be the third oldest known musical instrument in the world, with bone flutes dating back over 60,000 years. Drums were discovered first, and then various rattles were made, followed by bone whistles. Eventually, more holes were added and they were made larger. Over time, the instrument evolved with different materials being used in its creation - whatever was available in the area. Virtually, all types of hardwoods and softwoods were used for flutes at some point in time. Flutes had many different configurations - 2,3,4,5,6,7 or 8 holes. In parts of the southern United States, river reed was used to make flutes. This reed has a natural joint that serves as a sort of barrier that helps create a chamber. These flutes are relatively easy to make and may have contributed to the design of what is commonly referred to as the plains style flute. Which is the type that most flute players use today.

Native flutes and whistles were used for many reasons, usually varying by tribe. The Tribes of the NW Coast used bone and cedar whistles for different dances and spirit calling ceremonies. Still today, Eagle Bone Whistles are used at many  Pow Wows. Flutes were used for entertainment by many tribes while traveling; many of these songs still exist today. The Hopi Tribe had flute societies that performed powerful prayer ceremonies with their flutes. The Lakota Tribes used the flute for courting and love songs.

Like many other parts of native culture, the flute was not allowed by the government in most parts of the United States for a period of time. There were those Elders on rural reservations that kept the tradition alive, and people like Dr. Richard W. Payne, helped to re-introduce it to native societies. The renaissance began in the early 1900s from the Southwest, and started to grow rapidly in the 1960s. Until today, when the native flute is now widely accepted in most parts of North America. The instrument is so advanced that very little changes have been made in the last 150 years or so.

There are many stories as to the true origin of the native flute. This story was told to me by a Lakota Elder, Mr. Phil Lane (Phillip Brown Bear) just months before he passed on to the spirit world.

Legend of the first flute

A very long time ago there was a young man who was very interested in a beautiful young girl. He was always trying to get her attention, but she never seemed to notice him. Whenever she was present he would ride his horse proudly, but nothing he did seemed to attract her. One day when the girls were down by the river getting water, the young man went down to the river and began diving off rocks and swimming across the river, to show her how skilled he was, but again she paid him no mind. Dejected, the young man walked into the nearby old growth forest and sat down at the base of a long dead cedar tree. As he sat there thinking about this girl, a woodpecker landed on a hollowed limb that was over his head, the limb had been hollowed over time from the wind and weather. The woodpecker began to peck holes....tap, tap, tap......... along the length of this hollowed limb........ tap. tap, tap.......as the woodpecker pecked, the limb broke off and fell next to the young man, and as the wind blew over this hollow limb with the holes in it, he heard musical voices coming from it. He picked it up and found that when he blew into this limb and covered the holes, he could make beautiful, mournful music to match the feelings in his heart. He sat there for a time making up haunting melodies. The young girl heard this music coming from the old growth forest, and it was such a soulful sound that it captured her heart. She followed the sound of music into the woods, where she saw him sitting there at the base of this cedar tree playing this first flute that was given to him by the Woodpecker, and as she listened she fell in love with his music and fell in love with him. They went off hand in hand to live happily ever after. One of the more popular uses for the Native Flute was for courting, to attract a mate. The legend also says that once you got a mate, you were to put the flute away and never play it in public again, because if you played it in public again, you might attract someone else?

For more information about the flute, here are some reliable resources:

1. Indigenous Aerophones of the Northwest Coast